Why are we analyzing and publishing our unrealized returns?

As proud as we are of the metrics above, we will be the first to say that returns matter: the quality of our product offering to investors and entrepreneurs alike is linked to the realized returns it provides.

That said, we still lack meaningful realized exit data over a long period of time. Thus, we look to other signals: many of our portfolio companies have gone on to raise follow-on funding from premier venture capital firms who then set an equity valuation. We estimate that other venture investors have deployed over $600M in FundersClub companies after FundersClub's participation.

Besides companies that have exited, we use third-party valuation events to calculate our unrealized return (see our methodology below). Of course, gauging performance of venture capital investments after two-and-a-half years is a bit like gauging the winner of a marathon after mile five: you can start to gather a sense of how things may unfold, but the journey is still very early.

We also follow the standard practice of many leading VC firms and subjectively mark down selected investments when we internally have reason to believe that the fair market value of our securities is lower. That said, as with other VC firms, the information we have about the portfolio is incomplete and imperfect, and we cannot claim to mark down all investments that, with perfect hindsight, ought to be marked down.

We analyzed our internal rate of return ("IRR"), which is a time-weighted measurement of returns (read more on IRR from Investopedia here). We used this measure to account for the limited time frame in which we are measuring our return – our average investment was funded on 12/27/13, which is just ~13 months prior to the date of this analysis (1/20/15).

We also greatly admire the work that many in the industry have done before us to bring greater transparency and data to the innovation economy. We believe that sharing data about our early results can help better inform the startup community and further the dialogue around innovation, startup capital formation, and venture capital. To our knowledge, it is unusual for an individual venture capital firm to provide this type of data publicly, and, to be fair, there is little reason for them to do so, as their LPs are typically large, private endowments and institutions.

What did we find?

In summary, we found that a FundersClub member investing equally across all of our realized funds (5 funds as of 1/20/15) and unrealized investments (62 funds as of /20/15) from launch would have yielded, after administrative costs* and carried interest**, an unrealized annual net rate of return (also called "Unrealized Net IRR"***) on their portfolio of 104.8% after our first two-and-a-half years. We withhold administrative costs to cover the normal course expenses of private investing (items like legal, accounting, banking, registration, etc.), and our carried interest is rationalized by our sourcing efforts to find promising companies, execution of deals, and supporting portfolio companies post-investment through to successful exit or IPO. Without these administrative costs and carried interest, the portfolio would have an unrealized annual rate of return of 119.3% (also called "Unrealized Gross IRR").

While we are aiming to beat public and private benchmarks with our performance, we do not expect to be able to achieve these levels of returns over time, and given most of the investments are in the "unrealized returns" category, the actual realized returns may be significantly lower. We expect future reports of our IRR data to contain scaled down IRR numbers as markets and companies continue to rise and fall.

It should not be assumed that actual and future returns will be profitable or will equal the performance of securities in this list.

We've had seven investments experience realizations of value (IPO, acquisition, return of capital or shuttering). For those realizations, we've marked our investments at the realized value.

For unrealized returns, we chose third-party valuation events. Based on data from the Kauffman Foundation, the average externally-backed investment exits 4.7 years after early stage funding (if it exits at all). Our average investment was funded on 12/27/13, which is ~13 months prior to the date of this analysis (1/20/15), so it is too early to tell conclusively what our return data will show. Thus, most of our valuation figures are unrealized (i.e., inherently non-concrete).

What we DID NOT do:

What we DID do:

Even with these steps, the return outcomes for our unrealized investments are highly uncertain and may, in the end, have no bearing on the realized return profile of the FundersClub portfolio. Additionally, our past performance is not indicative of future returns, so we can't provide assurances that comparable returns (including those represented by applicable benchmark data) individually or in the aggregate will be achieved by any future FundersClub fund.

As with any returns data, we believe it is important to provide comparable benchmarking to contextualize return data and differentiate our idiosyncratic returns from other opportunities.

We use "Equal-Weighted Pooled Return" because of its similarity to the FundersClub methodology of equal investment amounts across all funds.

We use the top 5% percentile as a point of comparison because of the skewed nature of venture capital returns, both for individual companies as well as the funds, and, thereby, the firms themselves. To quote Andy Rachleff, CEO of Wealthfront and Co-Founder / former General Partner of Benchmark Capital: "The top 20 firms (out of approximately 1,000 total VC firms) [5%] generate approximately 95% of the industry's returns."

Caveats to the Cambridge Associates data are as follows: 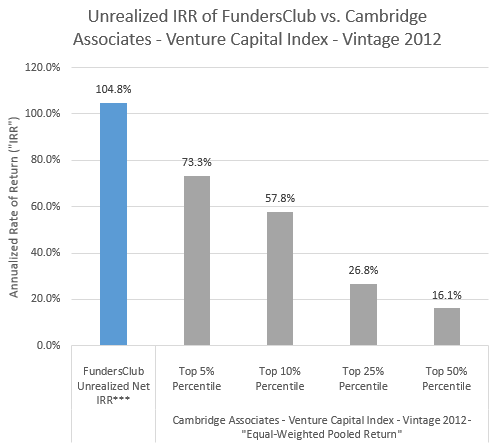 Because of the heavily caveated nature of Cambridge Associates aggregated venture returns to date, we additionally compared our unrealized returns to the S&P 500 (large cap equities) and Russell 2000 (small cap equities) over various time periods (not including any brokerage or other fees). 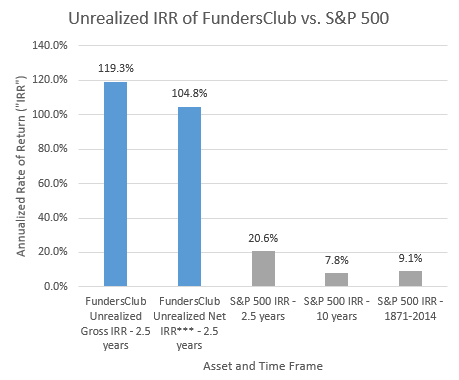 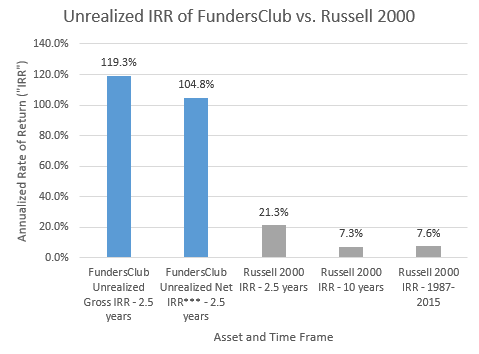 Beyond charting our returns against the S&P 500 and Russell 2000, the Kauffman Foundation's 2012 report "We Have Met the Enemy... and He is Us" calls out the importance of measuring venture capital performance against public market benchmarks in a mechanism called a "Public Market Equivalent" (PME). Within PME the net returns of a fund are divided by the prevailing public market benchmark. So if VC Fund A had returned, net of fees and carry, 2.0x and the public market had returned 1.5x over the same time period, then Fund A's PME would be 2.0x / 1.5x = 1.3x. 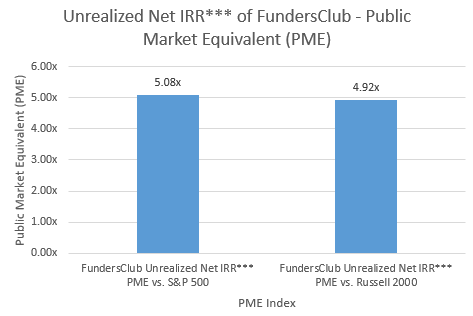 Select quote from "We Have Met the Enemy… and He is Us" (Kauffman Foundation's 2012 Report): "Over twenty years in our portfolio...only twenty funds out of ninety-four exceeded a PME of 1.3."

The Power Law at Work

You can see below the individual unrealized net return multiple*** of each fund ordered from highest return to lowest return for each of the last three times we ran this analysis (1/20/15 or "30 months", 7/25/14 or "24 months", 1/25/14 or "18 months). For example, for a given line, highest returning fund, "Fund A", would be situated furthest to the left, with second highest returning fund "Fund B" as a data point to the right of Fund A. Although each line will have a different number of overall funds at the point of analysis, we compared on the same distance of x-axis. Also, some funds invest in more than one company.

So what do we see? The "Power Law" distribution is continuing to play out empirically as a relatively lower percentage of funds drive the lion share of the returns.

Even relative to our posts roughly six and 12 months ago, the power law distribution has become more extreme and better formed. Even still, we would note, as our average investment is only ~13 months old, investments currently hovering around a 0% return may jettison upward when and if they too have a third-party pricing event or realized return of capital (or conversely, turn into a complete or partial loss).

You can find the "power law" described in Peter Thiel's lecture notes (as discussed by Thiel, Paul Graham of Y Combinator, and Roelof Botha of Sequoia Capital). To over-simplify, the Power Law states that financial returns of startup companies tend to follow highly exponential, not linear, distribution, and that the differences in returns will be heavily skewed.

"If you look at Founders Fund's 2005 fund, the best investment ended up being worth about as much as all the rest combined. And the investment in the second best company was about as valuable as number three through the rest. This same dynamic generally held true throughout the fund. This is the power law distribution in practice."

Thus, if the power law continues to hold true, we believe diversification is key, as only a handful of companies would be responsible for the bulk of the returns.

Note: Unless otherwise noted, analyses were run in the ~30 month period from FundersClub's launch on July 25, 2012 through to January 20, 2015. This data speaks only as of the date hereof, and FundersClub disclaims any obligation or undertaking to provide updates or revisions to reflect any change in its expectations or returns.