Founders will always try to find the angle from which their startup looks best. The narrative and direction of a pitch is set and controlled by founders, who are, in effect, selling their wares to investors.

It's the job of investors to not be swept up in the pitch, but to look for holes, to wonder why the founders framed things like they did. In doing this, investors need to abstract the important factors in a prospective investment and compare them against their experiences and other opportunities. It's this standardized canvas that will inform investors' ultimate decision on the startup.

Numbers reflecting facts aren't disputable, but investors should take note of what numbers are put forward by founders—and which ones aren't—and how those numbers are expressed. No number is massaged more by founders than those showing growth. I know from experience. My cofounder and I used to regularly search for the angle that put our numbers in the best light. That could mean showing growth in monthly terms versus annual terms, showing page views versus unique visitors, or total subscription growth versus total customer growth.

Founders will pick the number that pops. It's a fair strategy, and one that is understood by all parties.

The ability to distill a number, however it may be expressed, into a standard metric that can be considered against other startups and with an investor's experiences is a critical skill. It's perhaps most critical when considering a company's top-line growth. This is the number that is most often changed according to what founders think will be favorable in the eyes of investors.

There several ways to express this number, but two tend to predominate: growth per month, as a percentage; or as a multiple per year—such as 3x.

Investors newer to buying equity in startups may be more impressed by a company experiencing 4x annual growth versus a company seeing 12% monthly growth. But in fact, these numbers are about equal.

It may be that some investors subconsciously link the 'number-x' multiple way of expressing growth with final investment returns, as this is often how VCs' or angels' returns are reported: a 5x return, an 8x return, etc. That puts the multiple-per-year method in a more favorable light. But it shouldn't be. As the chart below shows, a company growing at 19% a month is growing at twice the rate of a company expanding 4x per year.

So to hear that a company is doing 4x annual growth can flick at those kinds of outcomes in an investor's head, it can tickle the possibility that this company has already returned 4x, even though this stat doesn't necessarily portend that there will be any return whatsoever.

Compounding monthly growth means that a bump from 12% a month to 19% a month doubles the yearly rate of growth from 4x to 8x. A company seeing 30% monthly growth is on pace to grow 23x during a year. 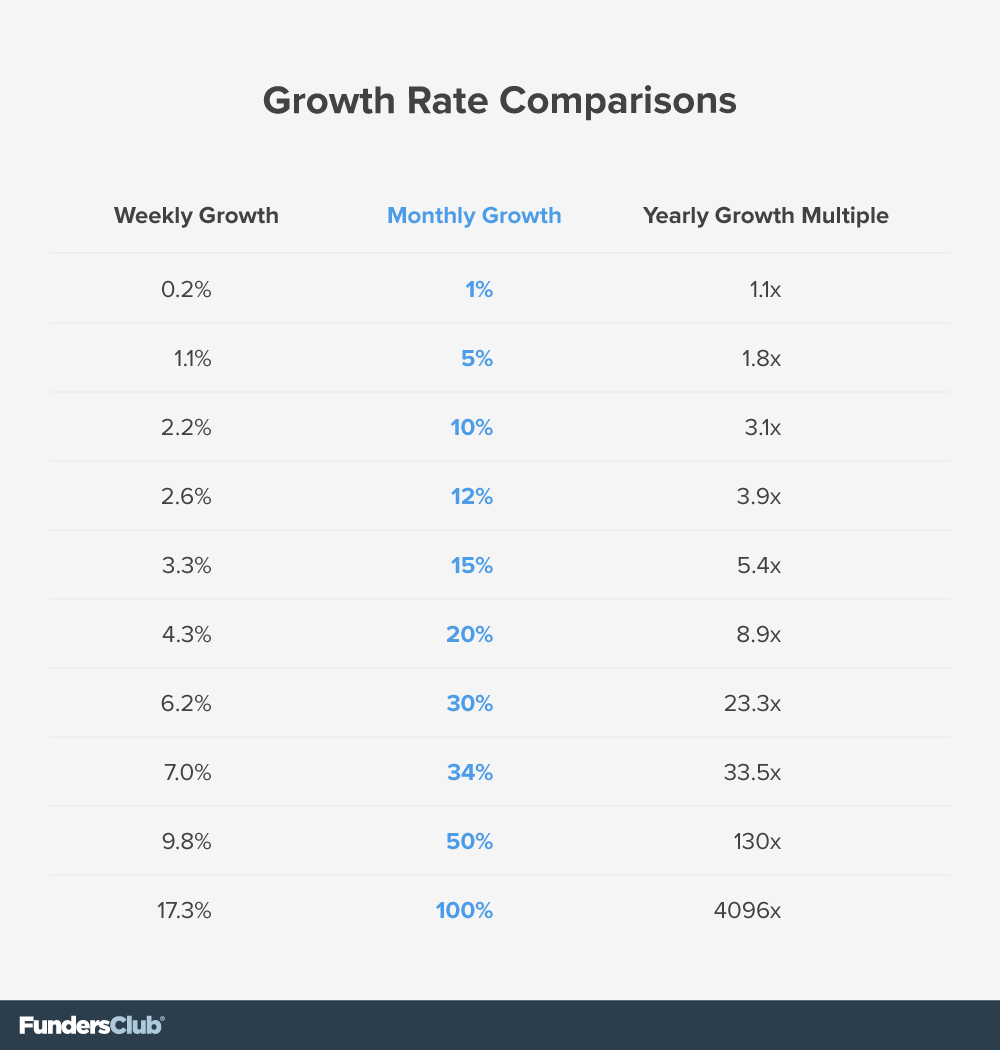 Experienced VCs and startup investors often prefer to see growth expressed as a monthly number. It can give a better overall picture of how a  startup is progressing, especially when monthly growth is depicted over multiple months.

Paul Graham goes as far as telling founders to focus on weekly growth numbers, and to treat growth as an exercise of optimization, a familiar mission for developers. YC tells its startups that weekly growth of 5% to 7% is a good rate, with 10% being exceptionally good.

No matter what kind of number and period an investor prefers, it's a required skill of the craft to be able to roughly translate one to the other. A physicist wouldn't compare three environments' temperatures using Fahrenheit, Celsius and Kelvin—she would pick just one.

It doesn't matter which form of growth numbers an investor prefers. But they should be able to perceive the differences of each one—and be able to relate each one to the others.