Most Startups Still Opt For Dot-Com Domains, But That’s Changing At Y Combinator

The quest to secure a dot-com domain name has led thousands of startups to choose names that barely resemble real words or have any connection to the space the company operates in. Even though perfectly good names might exist on other domain extensions, perhaps .co, .io or .ai, the perception that a dot-com moniker is critical leads many startups to choose domains—and therefore, names—that won't help them much.

Paul Graham wrote on this in 2015, when he opined that startups without dot-com URLs look weak and less legitimate. PG reiterated that view in response to a Twitter query I sent him recently on the subject—he largely still feels the same way about dot-com domains:

"All other things being equal, they're preferable, and things are way more equal than people attached to their current name realize," he tweeted.

I posited that perhaps dot-com domains are more important for consumer-facing applications and less-so for SaaS or b2b. Exactly the opposite, Graham said:

"Actually probably more important for b2b, because there you need the legitimacy. Plus a consumer co could just be a mobile app."

Graham points that many founders pick bad startup names to begin with, many without even the benefit of a dot-com domain, and that they get irrationally attached to them. One of the first things that PG told my cofounder and I upon being accepted by YC: your name is terrible, get a new one. We eventually found a name of which he approved.

With such emphatic forces pushing the case, it's logical that startups have held, and still hold, a heavy preference for dot-com domains for years—even if the roots of the preference trace back to the late 1990s when most assumptions about web companies and how they were valued were wildly wrong.

But everybody knew, even then, that a company needed a dot-com domain. That wasn't debatable. But it seems a subject that is up for discussion now, judging by data. Promising startups still end up with dot-com domains more often than not, but the margin at which they do is decreasing. 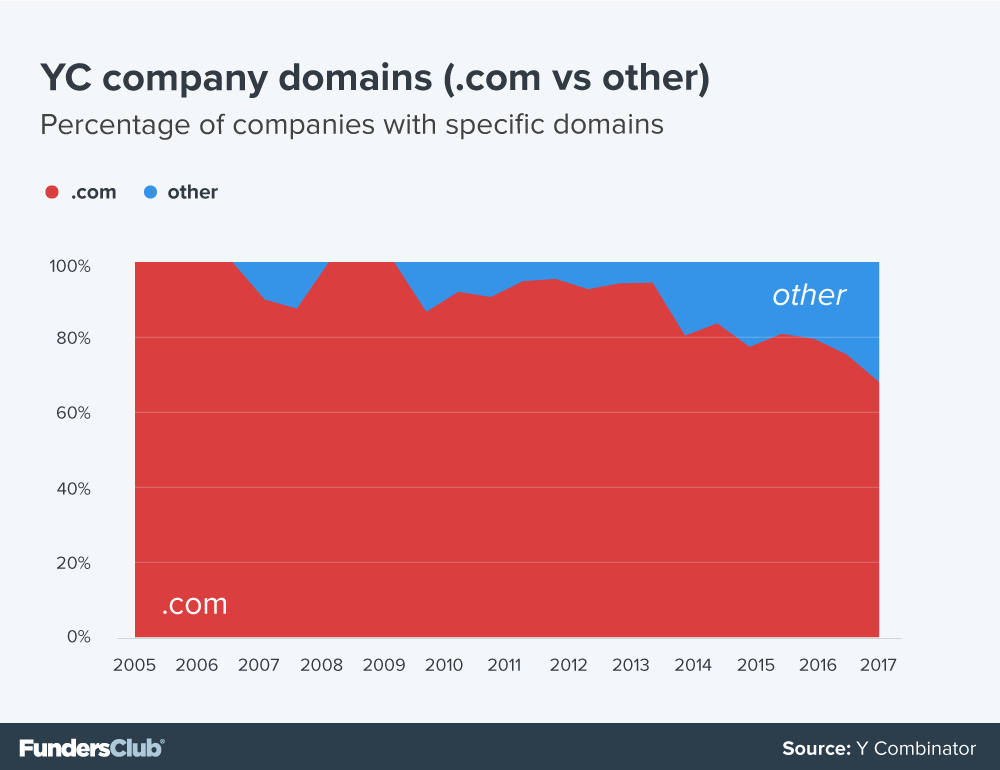 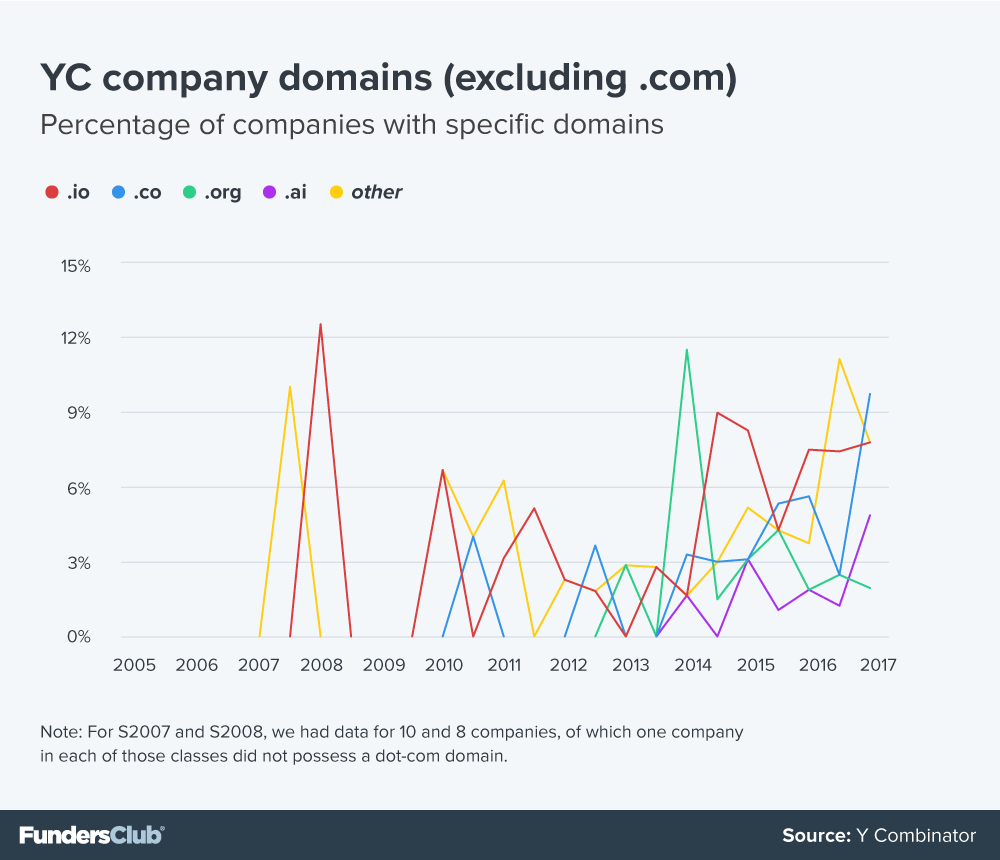 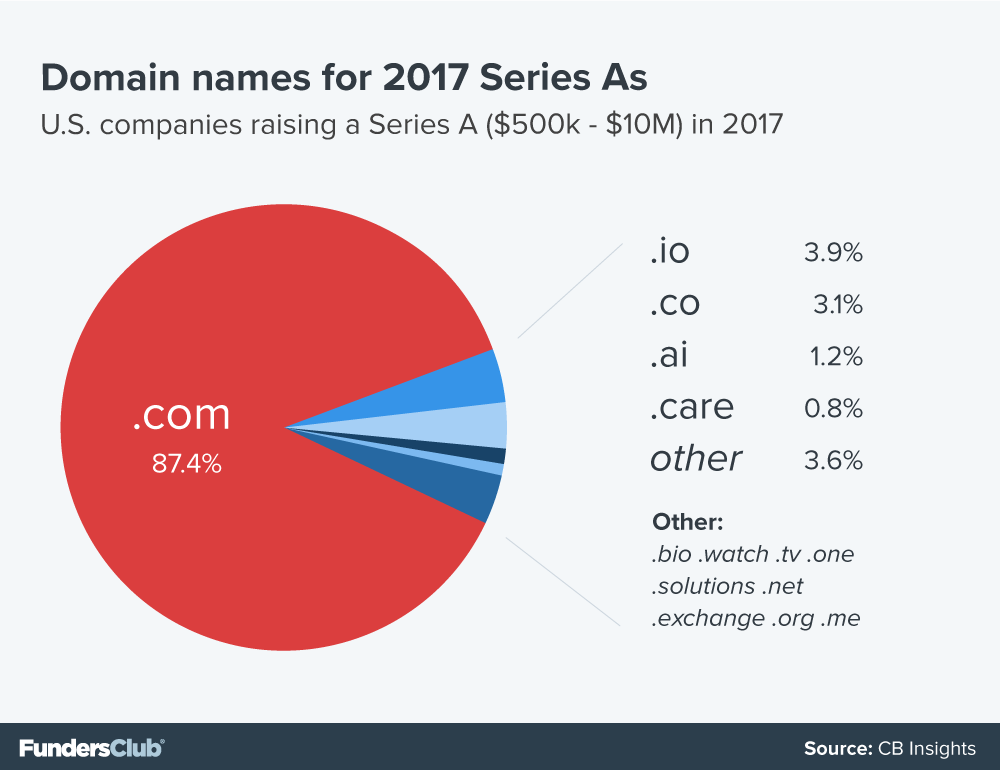 The crop of new Y Combinator startups is a reasonable proxy for the elite, top end of the startup pool in a given year, so it's instructive to look at how YC companies have selected their names.

The percentage of Y Combinator companies with dot-com domains has been following a downward trend since the winter class of 2014, when dot-com domains comprised 80% of the class. Before that point, almost all classes were well into the 90-percentiles for dot-com names, with seven classes at 100%.

This data derives from a list that YC publishes. We stripped the domain names out of the HTML to reach our results. For older classes, some companies' domain names aren't listed, so we excluded those startups from this examination.

YC and its companies generally provide a good look at overall trends in the startup world. In fact, YC companies are usually a cycle or two ahead of the overall market in terms of trends. We may be seeing that same effect with regard to domain names—YC might be ahead of everybody else.

U.S. startups receiving Series A funding this year—most of these companies are older and have more traction that a typical startup entering YC—are more likely to have dot-com domains.

Using data from CB Insights, we looked at the 254 companies in the United States that have closed Series A rounds in 2017 of between $500,000 and $10 million. In that group, the dot-com domains are still dominant, comprising 87.4% of all funded companies.

Comparing Series A companies to those in a YC batch isn't a perfect comparison, however, as pointed out above, as the average Series A company is likely older than the average YC company, so they would naturally be behind the naming trend cycle, if one exists, comparatively.

It's also possible that startups that have gone as far to have raised a Series A, and therefore likely had seed funding of some sort—perhaps $500,000 to $1 million—have paid up to get a desirable dot-com name.

That being said, 2017 U.S. Series As were 87.4% dot-com, and YC hasn't had a class as dense with dot-com domains since the summer of 2013—these were companies that were applying to YC four years ago.

Subjectively looking at the more than 200 companies that received Series A funding in 2017 revealed more than a few that had picked non-intuitive domains and remarkably bizarre spellings of normal words to snare a web address ending in .com. We won't single any company out, of course, but it's an intuitive mission for anybody who wants to have a look it themselves.

Those are the stats, but the question remains: do startups need a dot-com domain?

"Startups don't need the dot-com domain right away—they can go out and buy it later if they're successful, says Michael Saunders, co-founder of BluePrint Alpha, an app that delivers users news and updates on companies, topics and stocks. Before Blueprint, Saunders founded Campusfood, which was acquired by Grubhub in 2011, and AllMenus, also acquired by Grubhub, which continues to be an SEO powerhouse for restaurant menu information.

With Saunders’ advice in mind, startups should know who owns the dot-com domain. Preferably, it wouldn't be a competitor or a big company, but a squatter who is looking to make some cash by selling it eventually. And the name wouldn't be one with a big brand already associated with it, of course. There's not a lot of value in picking up the domain "IBM.ly" for your startup.

Grind now, and buy a dot-com later could be the strategy of some of the YC companies that currently don't own a dot-com domain—but it could also be a reflection that more YC companies are focused on a mobile-first strategy, where phone-based applications are the main interface for users, making the domain name extension less important.

Or, more simply, perhaps fewer YC companies feel they need dot-com domains because Paul Graham, once the daily force of all things YC, isn't around every day to remind them.